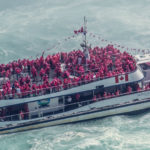 Each year Hornblower Niagara Cruises takes millions of visitors from every corner of the planet on an absolutely breathtaking tour of one of the world’s natural wonders: Niagara Falls.

Prior to May 2017, the widely popular tourist attraction spent about $10,000 a year to produce visual marketing content — yet couldn’t quite capture that quintessential reaction of seeing the world’s largest waterfall up close for the first time.

Even though tens of thousands of visitors were sharing their experiences on social media, Hornblower Niagara Cruises only had the rights to showcase about 30 or 40 images.

“I was trying as best as I could to actively search for things, but it was really difficult, because searching through Instagram doesn’t work very well,” said Chelsey Harasym, the Social Media Coordinator of Hornblower Niagara Cruises. “I was tracking everything in a spreadsheet, and I had to take screen captures of the rights request approvals, and then link that through Google Drive to the spreadsheet, and it was just a mess.”

Getting rights to user-generated content at a massive scale

Sourcing user-generated visuals remained a labor-intensive process until one day Harasym noticed a comment from Niagara Falls Tourism on a social media post, requesting rights to the photo using CrowdRiff’s Hashtag Rights feature. Niagara Falls Tourism was able to secure rights to the image by simply asking the user to reply to their comment using the hashtag #yesNFT if they wanted to give permission. “When I saw that I thought something was going on, and I wanted to know what they were doing,” said Harasym. “Niagara Falls Tourism gave me a demo of how they’ve been using CrowdRiff, and they raved about it, so I started researching it myself and it was probably less than a week after that that I signed us up.”

Suddenly Hornblower Niagara Cruises was able to access all the photos and videos their visitors were sharing, and request rights to them through CrowdRiff.

Though it’s hard to put a number to it Harasym predicts that Hornblower Niagara Cruises would’ve had to spend about $20,000 to $30,000 over a couple of months to match the sheer magnitude of visual content they’ve acquired with CrowdRiff — and that’s without considering the diversity of imagery they get from social media too.

Visuals that appeal to international travelers

With rights to a total of over 14,000 user-generated visuals secured since starting with CrowdRiff last year, Harasym says new possibilities are available to the organization, especially when it comes to advertising in key foreign markets.

“We do marketing in a lot of specific countries with Destination Canada and our partners in those countries,” she said, adding that sharing visual assets has become easier through CrowdRiff’s UGC Partner Network. “Being able to give them assets that specifically showcase people that have visited from those countries, being able to break that barrier, is invaluable.”

“We’d have to have 10 groups of models to cover every country and ethnicity we we’re looking to represent, whereas with CrowdRiff we can capture images of guests who have come from those countries,” she said. “Models have their place and they have their purpose, but these [UGC] photos are invaluable because we can’t recreate these people’s reaction to seeing The Falls for the first time.”

Hornblower Niagara Cruises also features authentic social photos in galleries on their website, which are self-optimizing. The CrowdRiff-powered galleries showcase a pre-selected group of images and self organize based on which are receiving the most engagement online.

“That’s something we just got recently, and that has just blown my mind,” said Harasym. “Now we’re able to see the images that are getting the most engagement, and we’re able to find which images in our galleries deliver the best ROI.”

Moving forward Harasym intends to integrate more user-generated content into print materials, and continue growing its network of partners around the world. However they choose to use the platform in the future Harasym says she’s most excited to see what features it offers next.

“I’ve been working with it for less than a year, and in that time the growth in development I’ve seen is really why I love CrowdRiff,” she said. “That to me is priceless, because I’m paying for something that evolves as quickly as social media and digital marketing is evolving.”

Want to see how you can get rights to UGC at scale? Let us show you what CrowdRiff can do for your brand: