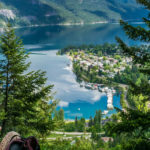 A year after launching its #FindingAwesome social media campaign and online contest—which encouraged locals and visitors to share content showcasing what they loved most about the region in southern British Columbia—the destination marketing organization was overwhelmed with the number of entries it had received.

“Over 10,000 photos and 1,500 videos were submitted through the year in all four seasons,” explained Dianna Ducs, Executive Director of Nelson & Kootenay Lake Tourism, adding that the content was too incredible to keep to themselves, but too plentiful to post on social media.

The town hall of the digital age: social live streaming

“We wanted to engage with everyone who had already submitted and reach a new audience of people that might not know about the area or were curious about the area,” she explained.

To do this, the first idea was to host a town hall style event where photos and images could be showcased to a live audience, where the winner for each season could be announced.

How did the Live Stream event come to be?

“As it got closer I was like ‘okay, we’re going to host all the winners and recognize non-winners who shared videos and photos that were awesome, but who wants to come sit in a theatre for an hour and look at stuff they may have seen online already?” asked Ducs. “I just didn’t think that was the strongest way to reach tourists, so I spoke to a few people in the area, sat down with a production team that does live streaming, and that was it; we came to the clear realization that the best way to reach our target audience is through the social channels, so lets do a live stream.”

On March 11th Nelson Kootenay Lake Tourism broadcasted a 45-minute live stream through Facebook, where host and Kootenay Mountain Culture Magazine Editor-In-Chief Mitchell Scott interviewed a range of guests with expert knowledge of the region (including Ducs) and showcased some of the best user-generated content it had collected through the year.

Unlike many Facebook live streams, however this was no low-budget webcam-and-computer-microphone production.

“We had three cameras, two people running a TriCaster, one person that was managing the guests, one person selecting the winners and sharing with the host, plus the host, plus we had three people who were reading comments and making sure people were engaging,” said Ducs. “I think there were 11 of us in total making it happen, working on lighting, making sure the mics on the people that were being interviewed were working; it was a lot happening really fast.”

Though one guest had to cancel last minute the rest of the production ran smoothly, with nearly 20,000 viewers tuning into the live stream — approximately equivalent to the entire population of the region. From start to finish, viewers left over 900 comments, on Facebook and the live stream platform on their site, showing an engagement rate that the DMO considers a great success.

Though the production was no easy feat, Ducs says that stream successfully drummed up interest for the region, and will continue to pay dividends into the future.

“We’re going to push it out through some YouTube ads, so we’re going to continue using it, and we can also push out those mini user-generated seasonal clips that are in there,” she said, adding that UGC clips will also be shared with partners that want to showcase the area.

“It was a lot of work, but worth it in the end. It was something new, and we need to keep reinventing ourselves in the DMO world.”

“I have to give a thank you to CrowdRiff for making the tool accessible to mini DMOs like ours,” said Ducs. “We’re a population of approximately 20,000 people across the region. We wouldn’t have done it—we couldn’t have collected all of this content from people—without the tools CrowdRiff provided us.”

Ducs adds that she views the Finding Awesome live stream as a culmination of one full year as a CrowdRiff customer, having produced the event to showcase four seasons worth of social media contest submissions.

While the exact format is still being tinkered with Ducs says she’s going to continue showcasing user-generated content in some sort of live format in the years to come.

“We’re still talking about what ‘live’ is going to look like for us in the future, but we’ll definitely keep doing stuff like this, just not to this extreme,” she said. “We set the bar pretty high on our very first try.”