More than the Rideau Canal, its world-renowned cultural activities or even Parliament Hill itself, studies have found that Canadians most associate their capital city with museums.

John shared one successful approach for generating earned media in his keynote presentation at the 2019 MuseumNext conference in Los Angeles.

Tapping into social media trends to promote their upcoming exhibit

Beyond getting tourists to walk a little further down the road Swettenham says his other mandate is to stay top of mind for locals, who represent about 60% of overall ticket sales. “To sustain that we need to appeal more broadly into adult segments,” he explained.

Swettenham and his team were tasked with engaging the local and national adult populations in early 2016 as the museum prepared to welcome a temporary exhibit on South-American dinosaurs.

“There was a thing already happening on social media called T-Rex Tuesdays, and they were really funny,” he said. “People were putting up videos of folks in those inflatable dinosaur suits doing just about anything, because anything a dino is trying to do is pretty funny.”

Swettenham worked with the museum’s local agency, Orkestra, to explore ways to connect the social media trend with the upcoming dinosaur exhibit. “We thought rather than just having one or two dinos, why don't we just go for a herd, and have them kind of come to town looking for the dinosaur exhibit?” he explained.

Who says dinosaurs can’t do yoga?

That’s exactly what happened on June 14th of 2016. That day unsuspecting Ottawa residents and visitors were visited by a sizable group of inflatable tyrannosauruses that stopped traffic as they arrived on the upper deck of an open-roof tour bus. As the day went on they participated in Yoga on Parliament Hill, took a river cruise, checked into partner hotels and ultimately made their way to the Canadian Museum of Nature. “People loved them,” said Swettenham. “We were getting all kinds of buzz.”

Swettenham adds that the museum provided promotional materials like banners and T-Rex footprints for hotel lobbies ahead of their visits from the herd, which helped strengthen relationships with existing partners and establish three new hotel partnerships.

That week, dinosaur suits graced the front page of the Ottawa Citizen, and were featured in articles published by major outlets in cities coast to coast. The day’s events even hit viral status thanks to a 25-second video created by the CBC. The “T-Rex Yoga” video posted by the national broadcaster was viewed more than 1.7 million times. 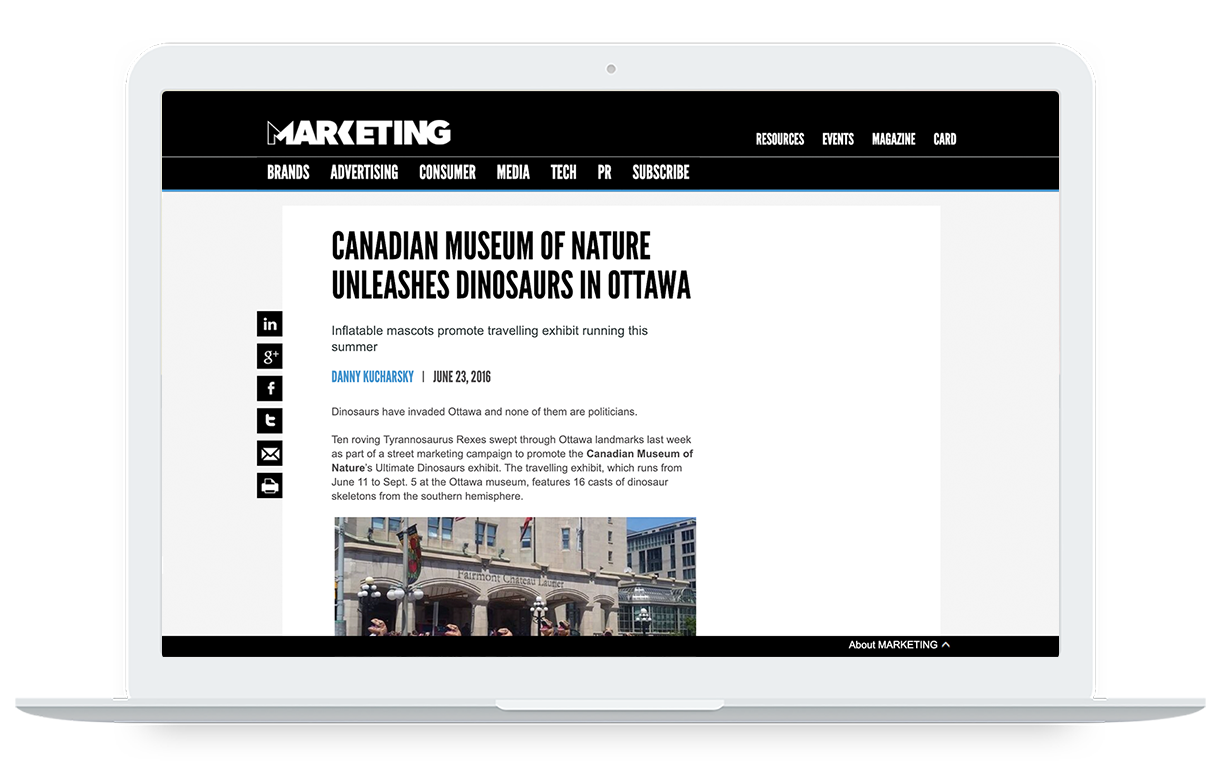 “It's fun for people to see them on the street, but let’s face it, even if they go to Parliament Hill, that's still just a few thousand people, it's not millions or hundreds of thousands,” said Swettenham. “At the end of the day the way to leverage it and expand the longevity is through social media.”

Extending the life of the social media campaign

In order to extend the shelf life of the activation Swettenham says the team produced and released a video of the entire stunt and pushed it out over social media. While not as popular as the post promoted by the CBC, the team’s own French and English language productions achieved over 80,000 views.

“The street activation is obviously what gets it started, but the social lets us push it out, not just to broader audiences but also over an extended period of time,” he said. “CrowdRiff really curates our social media for us, and it allows us to look at diverse platforms, get better access to content and better connect with folks over social media.”

The campaign was such a success that Swettenham decided to replicate it the following year to promote a new exhibit on the arctic. In early summer of 2017 the city was once again flooded with a herd of inflatable creatures, this time in white polar bear outfits. While the bears also participated in yoga and ran through the market (this time stopping at a fish store and a polar bear statue) they also chased a Zamboni through a hockey rink and an ice cream cart through the park.

Taking a walk in a park and running into these guys 🇨🇦#articatthemuseum #museumofnature #Ottawa #Canada #Canada150 #myOttawa #polarbear #fun pic.twitter.com/3crq7GTYaF

“The first time we did it there was a lot of chance involved, we hadn't really informed all media contacts of exactly when the dinosaurs were going to be where,” he said. “We got a bit better at that the next time; we laid out an agenda that we could brief media on.”

In the second iteration of the campaign Swettenham says the team also came prepared to do more social tweeting and Facebook live videos during the activation, and the extra effort appears to have paid off. The social media campaign drew over 700,000 views, and the better-prepared media was able to produce even more content, with videos and images once again featured in newspapers from coast to coast. This time the story was also picked up by bloggers and social media influencers, an even more significant coup considering the campaign’s target demographic.

Now Swettenham says the museum and its agency partner are considering ways to promote this year’s exhibit on flying dinosaurs. While the project is still in the brainstorming phase, citizens of Ottawa can probably prepare for another inflatable invasion in the coming months.

Learn how some of the most creative museums are attracting visitors

If you enjoyed reading about The Canadian Museum of Nature's creative campaign, there's plenty more where that came from! Our eBook, 11 Creative Digital Museum Campaigns, explores what museums are doing to create original and engaging digital experiences to attract and retain visitors.