In 2022, many destination brands, and particularly those in North America and Europe, understand that diversity, equity, and inclusion (DE&I) efforts are a year-round commitment. You can’t stop marketing to BIPOC (Black Indiegous People of Color) travelers after February or women travelers after March.

The same is true for 2SLGBTQ+ (Two-Spirit, Lesbian, Gay, Bisexual, Transgender, Queer, plus other identities) travelers. While June is recognized as Pride Month by many countries, including the United States, Canada, and the United Kingdom, the 2SLGBTQ+ community travels year-round and pays attention to destinations that have a history of supporting this group.

Especially since 2020 and the rise of the Black Lives Matter movement, DE&I conversations at destination marketing organizations (DMOs) have focused on how to create a more inclusive brand for BIPOC travelers. So much progress has already been made at bringing these communities to the table when planning tourism development, and that’s how we know you’re probably hungry for more ways you can be inclusive and really make an impact.

That’s why we’re asking you to make more room on your plates to include the 2SLGBTQ+ community in your DE&I strategies (if you haven’t already!) and learn how your destination will benefit from representing these travelers in marketing campaigns and content.

While money shouldn’t be the biggest motivating factor in reaching out to LGBTQ2S+ travelers – Out Now estimates the global 2SLGBTQ+ travel market is worth more than $218 billion – as a group they generally vote with their wallets by choosing not to visit destinations where they feel unwelcomed. In fact, we’ve seen backlash and many canceled trips from business and leisure travelers when discriminatory laws were passed in places like Florida, Indiana, and North Carolina.

But more importantly: destinations should understand that 2SLGBTQ+ travelers are generally an open-minded group due to the fact that many of them have faced discrimination and lack of acceptance in their own communities. Many 2SLGBTQ+ travelers want to visit your destination not just to have a good time but to also leave it a better place than they found it by connecting with locals and forming new friendships.

Couldn’t we all use more accepting and empathetic people in our communities? We sure think so! So hop on board and get excited to see how this Pride Month should only be the beginning of your DE&I journey with 2SLGBTQ+ travelers.

One of the biggest mistakes a destination could make about the 2SLGBTQ+ community is assume the acronym only represents sexual orientation. It actually also has so much to do with gender expression and identity, which isn’t the same thing as sexual orientation. Sexual orientation relates to who or what a person is sexually attracted to, while gender identity pertains to which gender – male, female, or non-binary (identities that are not solely male or female) – a person most identifies with, which could be different than the gender they were assigned at birth.

The Two-Spirit identity is also slowly gaining more recognition and some organizations and companies have added the 2S abbreviation to the 2SLGBTQ+ acronym to represent this group. Two-Spirit refers to indigenous Americans and Canadians who identify as having both the male and female spirits and the term was coined in 1990 at an indigenous gay and lesbian gathering in Winnipeg, Manitoba.

One of the simplest thing you can do as a DMO to make all travelers feel seen and welcomed is to include people’s gender pronouns (such as he/him/his, she/her/hers or they/them/theirs) in any content where someone is representing the destination in some way. Never assume that just because someone may look “masculine” or “feminine” that their outward appearance matches their inner gender identity.

Make sure you’re including the entire acronym

And as we’ve already mentioned the acronym, remember that it exists for a reason, and excluding a letter sends the wrong message to a group of travelers who desperately want to be seen and celebrated.

Just writing “LGBT” or “Gay Pride” may be an honest mistake (and the acronym is always evolving, so we get it can be hard to follow!) but it alienates a large part of the community and disrespects groups like trans people who worked tirelessly for years to be included in the community.

Pride parades and events have historically mainly catered to lesbian women and gay men, but in recent years have begun to embrace trans, queer, and other groups that have faced some of the worse discrimination among the community. That’s why it’s important to make sure every letter of the acronym is represented in your DE&I and marketing efforts and in your local Pride and other events celebrating the community.

Using UGC will help you better represent 2SLGBTQ+ travelers who are actually visiting your destinations and help you learn more about them.

While these travelers definitely seek out bars, clubs, and restaurants that cater to and support the community, these are far from the only places they’re interested in visiting. Playing into stereotypes won’t help you understand their true preferences or even help advance DE&I within your broader community.

Visit Phoenix is a great example of a DMO that has doubled down on representing the 2SLGBTQ+ community through UGC and prioritizing how these travelers are represented in content. We think KJ Philp, Content Manager at Visit Phoenix, who spoke at SEE 2021, said it best:

“The images you’re looking for are out there on social, I promise,” said Philp. “There isn’t a singular way to look 2SLGBTQ+, success can be in the subtleties. It’s not all about rainbow imagery and the community isn’t a monolith. Some people under the umbrella are more marginalized than others.”

Despite all the progress that has been made, unfortunately, many travel blogs and publications (both mainstream and specifically catering to groups within the community) continue to overwhelmingly portray the community as mostly white, cisgender (when a person’s gender identity corresponds to their birth sex), young, and able-bodied.

According to recent Nielson research, one in 10 2SLGBTQ+ people have been targeted by ads based on their sexual orientation or gender identity, but only one in five said it was a positive experience. Respondents said advertisers can improve inclusion by avoiding stereotyping (50%), being more authentic and realistic in depictions of 2SLGBTQ+ people (44%) and involving the community when planning and creating ads (37%).

As many societies and cultures have grown more accepting, more people feel comfortable to come out and be their authentic selves, whatever that may look like. Travel media and DMOs should reflect this shift.

Take this chart below, for instance, which shows that although younger generations make up the largest share of the U.S. self-identified 2SLGBTQ+ population, older generations like Gen X and Baby boomers make up nearly seven percent of the community’s population. And keep in mind, this data only include people who chose to self-identify.

And if you need more proof that older 2SLGBTQ+ travelers deserve some love, check out The Old Gays, who have amassed more than seven million followers on TikTok alone! 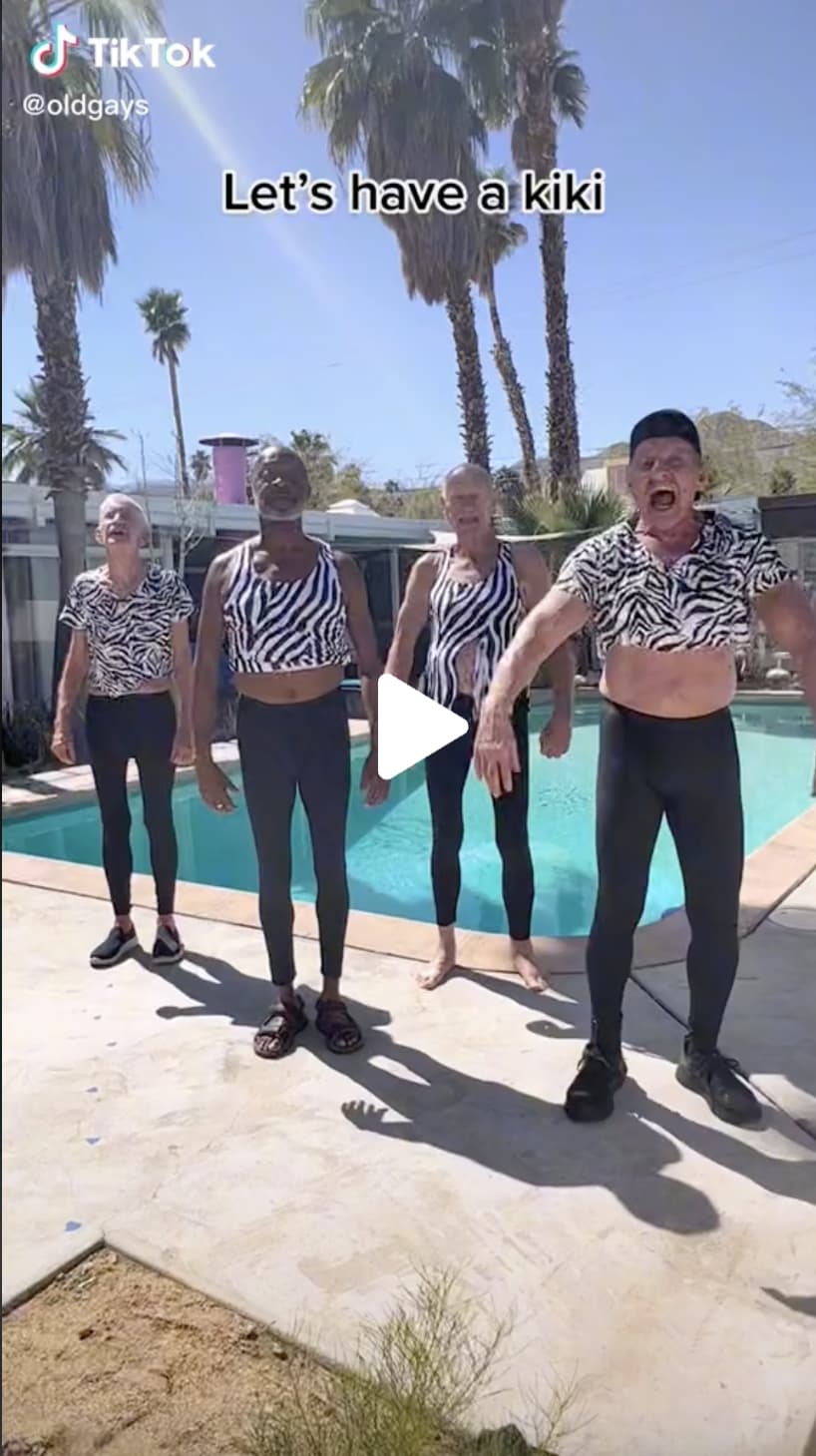 Do you have 2SLGBTQ+ representation in your DMO?

Like how we talked about DE&I during Black History Month, reflect on where your DMO staff is with representing the community.

Everyone needs a seat at the table for your marketing to come across as authentic, and to avoid some of the stereotyping that we’ve discussed. This is also why it’s important to work closely with local 2SLGBTQ+ content creators and collaborate with them on the best stories to tell that only your destination can offer.

We love these two examples from the San Diego and Vancouver DMOs on how to show your commitment. Back in 2019, Vancouver used funding awarded by the Canadian government in 2019 to finance inclusivity training for local businesses and the local Pride organization was planning a local powwow for Two-Spirit groups. This year, San Diego is giving free membership, mentoring, and networking opportunities to businesses owned by people of color, 2SLGBTQ+, women, and veterans.

The Black Lives Matter movement helped make Juneteenth, which commemorates the day in 1865 when the last slaves were freed from Texas, a U.S. federal holiday in 2021 celebrated on June 19. We think June has plenty of room to share, and that’s why DMOs should find ways that Juneteenth and Pride Month can complement each other and tell stories that were buried for too long.

BIPOC travelers already face discrimination based on their skin color, and then those travelers who also identify as 2SLGBTQ+ often face another level of discrimination whether at home, work, or elsewhere in their communities. It’s a double whammy that organizations like yours are slowly starting to change and by giving BIPOC travelers within the community equal representation, you’re helping your destination and brand live up to its fullest potential.

While Juneteenth has become a celebration in many BIPOC communities, it’s also still a very sensitive day and a reminder of the oppression that BIPOC travelers still face. Keep this in mind when planning Juneteenth content to show travelers you’re aware of the different dynamics. And it’s ok if your destination doesn’t have any official Juneteenth events on tap since there are probably plenty of other creative ways to tell local BIPOC stories if you take the time to look.

We love this project from Visit Philly where the organization worked with 12 queer and BIPOC artists to fill emply storefronts across the city with 24 works of art inspired by Black and Brown-owned businesses affected by the pandemic. It’s an example of how to acknowledge the disproportionate hardships that BIPOC-owned businesses face while also raising awareness through beautiful artwork that helps inspire travelers and locals to make change.

Don’t be shy and be authentic – travelers will notice

Being bold and authentic is the most important takeaway we could end on. Don’t force your brand to market itself as an 2SLGBTQ+ oasis if it isn’t, but also don’t be afraid to spotlight people and stories that may be unfamiliar to some of your audience.

Perhaps some of your non-2SLGBTQ+ audience hasn’t been to a drag show or Pride parade, for example, only because they weren’t sure if they were welcomed. This is your opportunity to show them that everyone is welcome and that your community will be better for having them as allies.

Show drag queens, show couples holding hands and being their authentic selves, and show the community participating in activities other than Pride parades (although those events are also important to share!). These are just a few suggestions - the content possibilities are endless.

Remember that this is a community that is diverse and growing every day while constantly adapting to new laws that govern some of the most personal aspects of their lives. The 2SLGBTQ+ community is the fastest growing minority segment in the U.S., for instance, according to 2021 government census data.

Being equitable and inclusive means showing 2SLGBTQ+ travelers that you’re committed to making them feel welcomed and part of the brand each and every day, not just during Pride month.