Like many residents of the American North East, Jessica Willi’s family made the annual pilgrimage from their home in Western Massachusetts to a stunning 10 mile by three mile wide piece of natural beauty known as Block Island each summer, just off the southern coast of Rhode Island.

Even as an advertising student at the University of Colorado Boulder, Willi continued to return each summer, eventually moving to the island full-time approximately 12 years ago.

Today, Willi is the Executive Director and sole employee of the Block Island Tourism Council, where she spends much of her time showcasing the beauty and wonder of the destination she herself had fallen in love with at a young age.

She explains that it’s a vitally important role for a small community whose economy heavily depends on its highly seasonal tourism industry, and a job that must be executed with a relatively miniscule budget.

“We have gorgeous vistas, we have cliffs, we have white sand beaches, we have really super blue water; so we mostly use photography,” she said.

In the autumn of 2016, Willi wanted to freshen up the “dated” photography that was being used on the Block Island Tourism Council’s website.

The problem, however, was that the leaves had already changed color, many of the local restaurants and shops had shut their doors for the season, and the images that she could pay a photographer to collect in the off-season weren’t representative of the best that the island had to offer its tourists.

It was around this time that Willi received a cold email from a representative from CrowdRiff, offering a visual marketing platform that could populate her website with the latest and greatest images Block Island visitors had uploaded onto social media. 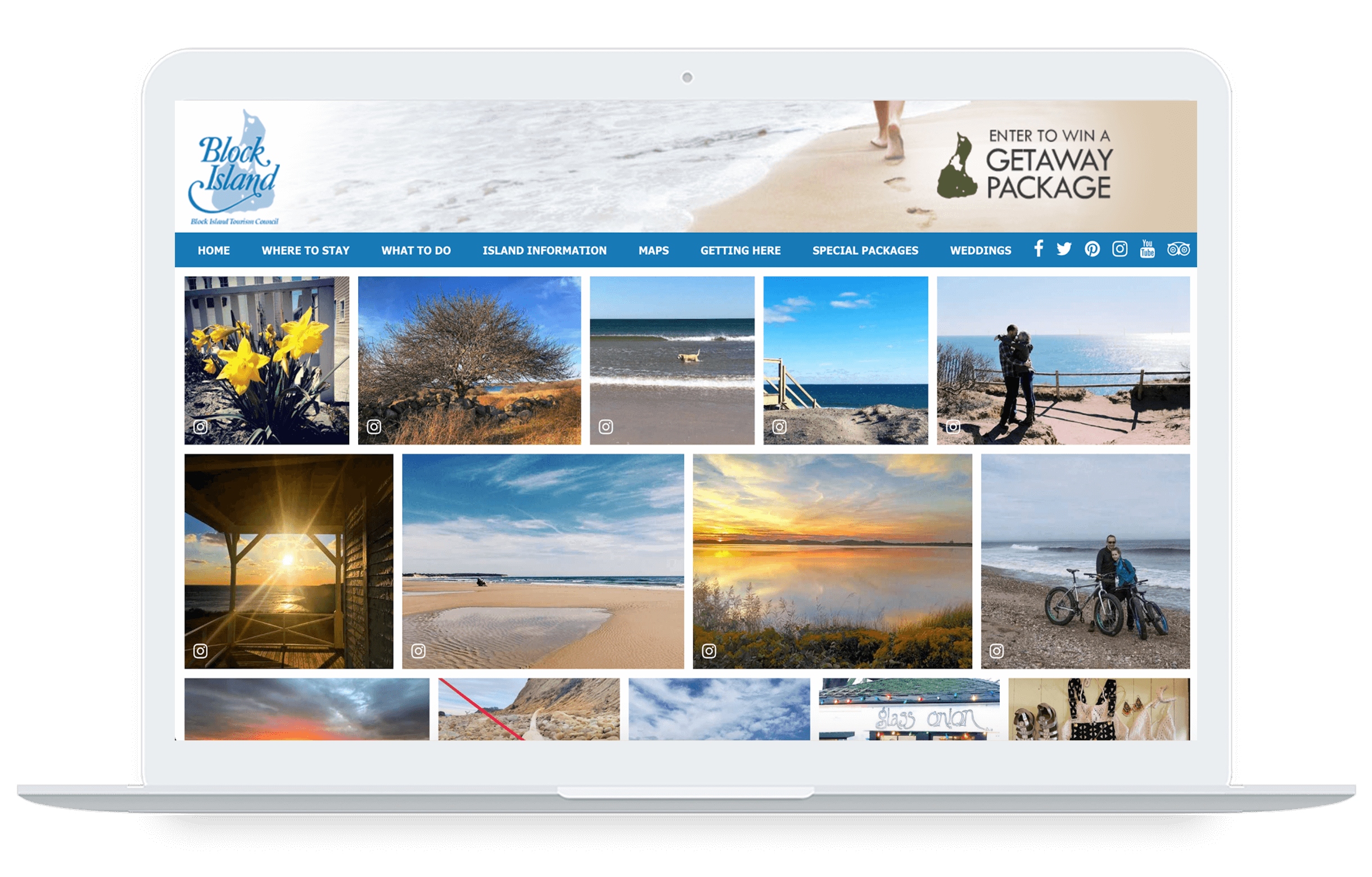 “CrowdRiff was very attractive to me because I could pull from thousands of images. And as far as being a time saver, that was awesome.”

The platform is also ideal for Willi as the head of a one-woman operation in a highly seasonal industry. While she may have time to set up her photo streams and libraries in the off-season her schedule is extremely limited in peak season, which is also when the bulk of Block Island’s visuals are shared on social media.

“Time is the biggest challenge for me, being one person. Once I did the initial setup I didn't have to think about it anymore, but [CrowdRiff] still stays current and can be updated easily.”

Willi also feels that user-generated content is more appropriate for a destination that bills itself as authentic and natural. She feels that the candid shots captured by tourists and locals are far more impactful than the images she could pay a professional photographer to capture.

“User-generated content gives a much better feeling for a place than a professional photographer can. You're getting it from people who have been there, and are seeing it through their eyes.”

Willi admits that there was some hesitation by the tourism board when she introduced the idea of using CrowdRiff this past autumn, adding that since implementing the technology she has only received positive feedback.

“One of my board members, when I first pitched this, was unsure, because he sort of thought it was almost too cutting edge for our purposes,” she said, adding that some believed it was designed for major destinations with big marketing budgets. “Everyone thinks we made the right decision, and we’re extremely pleased with how things are going.”

Since implementing CrowdRiff, Block Island has seen a 4x increase in time on site, and reduced its bounce rate by 30%.

More than anything, however, Willi takes pride in knowing that her website lets visitors share their own experiences as they fall in love with the island that captured her imagination as a child.

“It's not a hard sell when you get nice imagery and show people who we are.”